Arsenal and Manchester United are interested in a move for Atlanta United star Ezequiel Barco, according to a Portuguese newspaper.

Record yesterday had a front page story about Sporting’s interest in signing Barco, who was recently called up to Argentina’s U23 team.

The report claims that Jose Mourinho’s arrival at Tottenham could well speed up a move for Bruno Fernandes to the Premier League. A bid of €70million will be enough for Sporting to sell their prized asset and they will in turn look to 20-year-old Barco and Velez Sarsfield’s Lucas Robertone to replace him.

Apparently Sporting have been watching the MLS attacking midfielder for some time with the front page of headline on Record claiming ‘Barco in the plans of the Lions’.

Barco had an impressive season with both Atlanta and scored four goals and grabbed three assists in 15 MLS appearances, while he also had a good run of form for Argentina in the U20 World Cup.

That has also lead to interest from United and Arsenal, while Benfica, Lille and Valencia are also tracking Barco, who was a €15million signing from Independiente last year. 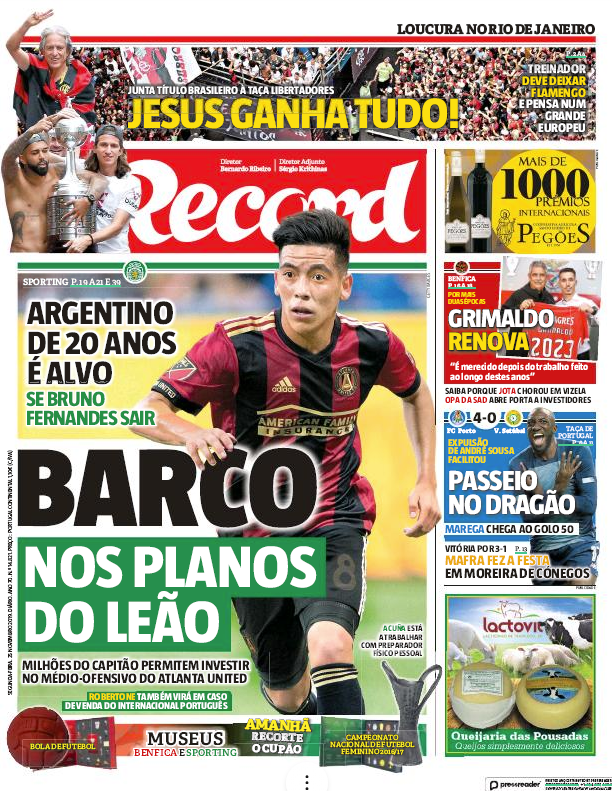 The paper suggests Atlanta are now willing to cash in on the player, who is under contract until December 2022 with Sport Witness claiming Sporting will not be able to afford the left-sided Barco.

Dirtyyouthsoccer claim “Sporting are an ambitious club who have a track record of bringing in young and talented players to develop and sell on to the biggest clubs in Europe”.

And for the American side it would seem like a logical next step for Barco, but the likes of United and Arsenal should be able to offer a more attractive financial package to the MLS side.